Welcome to the Olive Oil Monthly market update powered by Certified Origins. We will provide you with relevant and transparent information on Extra Virgin Olive Oil (EVOO) and Olive Oil (OO) trends to help you navigate the market.

WHAT IS HAPPENING THIS MONTH

On October 3rd, the government of Andalusia, Spain’s most significant extra virgin olive oil (Evoo) producing region, published its official estimate for the harvest 2022/2023. According to this report, farmers and cooperatives in Andalusia expect the total production to be nearly 50% below the 5-year- average.

The news of this pessimistic forecast immediately lifted the trading cost for all origins and grades of olive oil. Our market experts are observing peaks as high as 4.60 Eu/kg for non-organic Evo from Spain, surpassed only by Italian Evo of the same category, trading above 5.60 Eu/kg.

Spain alone is responsible for nearly half of the global olive oil production. A crop failure in this country will drastically reduce the amount of olive oil available for trade and consumption, increasing its demand from other origins.

Tunisia, historically one of the most competitive origins for conventional Evoo used in Mediterranean blends, currently trades at 4.20 Eu/kg, followed by Greece at 4.55 Eu/kg and Portugal at 4.65 Eu/kg.

The war between Ukraine and Russia drastically reduced the market availability of sunflower oil exported from that area. European industries actively seek an alternative to replace this light-colored liquid fat, used inumerous food productions and recipes. The conflict and the grim forecasts from Spain for 2023 lifted the cost of refined Olive Oil well above the traded value of Evo: an unprecedented 4.70 Eu/kg.

Some rain has finally started to fall in Spain, Italy, and Tunisia this month, helping the trees to recover from a dry summer. Too much rain, moldy fields, and humidity during the harvest could, however, slow-down farmers from collecting the fruit in time and potentially create some quality issues in the mills.

The Andalusian territory can count on over 1.64 million hectares of olive plantations, distributed mainly across the municipalities of Jaen (43%) and Cordoba (25%). In the last five years, Andalusia produced an average of 1.1 million tons of Olive Oil, representing approximately 80% of the total production in Spain.

High temperatures in Spring and Summer, combined with a significant rain deficit aggravated by restrictions on irrigation supplies, are among the causes behind this challenging situation for Spanish farmers and Olive Oil producers. Should these figures come true, it would be Andalucía’s second-worst harvest after the crop from 2012/13.

The Andalusian government expects only 16,700 tons of organic Evo from this region in 2023: a 42% drop from the previous campaign. Of the total, 8.000 tons will come from Cordoba, an area specializing in organic farming. 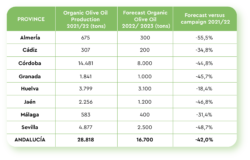 The Tunisian government published the official forecast for the 2022/ 23 campaign. According to the National Olive Oil Board, Tunisia’s production will be 15% lower than last year (240.000 tons) and 23% less than the five-year average (257.000 tons).

As sourcing managers adjust their purchasing strategies, the recent price increases will probably slow the trades for a few weeks.

Our experts believe that the actual volumes for the upcoming harvests will be close to the forecasts, resulting in a substantial cost increase for both Extra Virgin and Refined Olive Oils at the production and consumer level and a subsequent reduction of the global reserves. Some help could come from the recent rains in southern Europe, but it won’t be enough to invert drastically the trend for this year.

•  For how long the Russian conflict will continue to affect refined oil demand?

As winter marks the beginning of harvest time in Europe, farmers and mills are already looking forward to spring 2023, when the olive trees blooming will offer a first indication of what to expect for 2024 production. Until then, we prepare for the market to stay substantially high until Spring 2023.