Welcome to the Olive Oil Monthly market update powered by Certified Origins. We will provide you with relevant and transparent information on Extra Virgin Olive Oil (EVOO) and Olive Oil (OO) trends to help you navigate the market.

WHAT IS HAPPENING THIS MONTH

After the holiday break in December, the Spanish Extra Virgin Olive Oil (EVOO) market spiked to 5.70 Eu/Kg. This is an absolute record for conventional oil from this origin, historically trading on average at 2.50/3.00 Eu/Kg.

This panic wave most likely originated from the release of new pessimistic estimates on the ongoing harvest in Spain, confirming the expectations of 700,000 Tons of oil available for 2023, about half of the typical average production potential from this country.

Today, Spanish EVOO value is still substantially high and back at November levels: conventional EVOO prices oscillate at 5.45-5.65 Eu/Kg, depending on the quality grade and the presence of pesticides residuals, while the Organic category is averaging 5.95 Eu/kg value.

On the other hand, Italian, Greek, and Tunisian Olive Oil markets remain slow and stable.

This December, Spanish mills collectively released only 97,329 Tons of new olive oil into the market, including approximately 40,000 Tons of imported oil. Estimates put EVOO exports from Spain for the month of December to be around 63,500 Tons and 34,200 Tons dedicated to local consumption.

The release of 97,329 Tons of Olive Oil to the market is for the month of December a very low number. The average for the last 10 years was 123,380 Tons, and compared to last year, the number dropped by 26%.

Considering the whole Olive Oil campaign (October, November, December) Spanish mills released a total of 338,040 Tons: 218,170 Tons had been exported and 119,880 Tons sold to the domestic market. Compared to the same period of last year these numbers represent a decrease of over -10%.

These numbers go “hand in hand” with the well-known low production figures:

In the month of December Spain produced only 232,391 Tons, this is 50% lower than compared to December last year (542.600 Tons). During this past trimester Spain has produced only 431,090 Tons, compared to the same period last year, this number represents a drop of 51%.

The Spanish market in December 2022 reported a total available stock of only 625,670 Tons, this number represents a decrease of -36%, compared to the total stock available in the same period in the previous year. 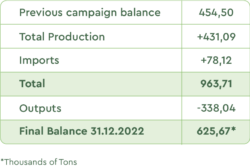 Rain, combined with warm and humid weather conditions in some regions of Europe during the harvest, could favor the conditions for fruit-fly attacks. The olives damaged by the larva of this tiny insect tend to develop a flavor defect, negatively affecting the quality profile of EVOO.

Except for Greece, the already scarce EVOO available in Europe could also face some quality issues making sourcing increasingly challenging.

The lack of offers and the extremely high prices are slowing down the demand, creating some room for hope for a down-trend of cost.

Removing unnecessary promotions and working closely with suppliers on long-term strategies could be the best strategy to ensure coverage for the whole year and price stability on the shelf. Reach out to talk with your team of experts for any question or comment you may have.